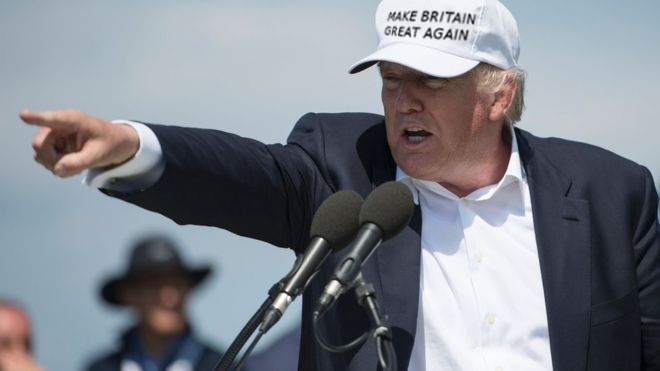 Mr Davis walks into a golf club where Mr Barnier is the president. He pours petrol all over the soft furnishings, then threatens to set it alight. “You had better listen! We have had a vote and just over half of us want to resign our family membership of this awful club.” Mr Barnier is both surprised and shocked.

“Why are you leaving? Didn’t your Aunt Maggie negotiate a huge discount? We even let you play using your own balls.” Mr Davis is now in full tantrum mode. “This club is not as exclusive as it used to be. You have let too many foreigners join.  We have voted to leave and leave we shall.  However, we would still like to continue playing golf here and eating in the restaurant free of charge.”

Mr Barnier is starting to worry about the mess caused by Mr Davis. “I am afraid we could never allow that. Should I fetch a fire extinguisher?”
Mr Davis, who is not known for his great wisdom or acumen, pauses. “No. If the place catches fire, you will only have yourself to blame. Whilst only half the family believed my story about the many benefits of leaving, Boris our head of diplomacy and Theresa have decided we should quit anyway! Furthermore, with all the money saved I will be giving 350 million a week to the National Health, who is already exceeding targets for unattended patients.”

Mr Barnier is a little upset and pleads with him not to leave, but Mr Davis is having none of it. “Besides, my friend has a much better golf club in Trumpton. I can play there for next to nothing.”
“Yes, I know,” says Mr Barnier, “but isn’t that a Crazy Golf course? You are aware that we will not be able to buy any more of your ‘made-in-Sunderland‘ Nissan golf carts either.”
“I don’t care, I hear Windy Miller’s fresh chlorine-washed chicken is to die for,” says Mr Davis, who has been selling a lot of golf carts to the club, but hasn’t yet succeeded in securing any orders from Trumpton. “Besides, the carts are made in a part of the country that doesn’t matter, as it’s not London.”
“What about your son, the golf pro who has taught at the club for years? We can’t continue to employ people who aren’t members.”
“Don’t be so stupid. You need him and you need to keep on selling us those special BMW and Mercedes golf clubs we all love so much, even if we can only use them to play crazy golf.”
Mr Barnier thought about this for a while, then with a heavy heart turned to Mr Davis, whose smug little face reminded him of a dog who had just been shown a new card trick. “Actually we don’t need to sell you anything. Now, why don’t you just naff off and stop wasting everyone’s time!”

And that, by all accounts, is the correct way to write sad little allegories. Instead of the pro-BREXIT botty dribble originating from a Kremlin troll farm and recirculated via the tabloids and UKIP. You can view the original article this is in reply to here.

Oh, we did all laugh so much down at the BREXIT golf club, because leaving the European Union; a complex body which looks after the security of its members, guarantees human rights and promotes tariff-free trade across its borders, is exactly like leaving a golf club. It’s a shame that BMW is going to pause production of Mini’s over BREXIT uncertainties, but not to worry: I hear there are plenty of jobs going in the north, picking potatoes, once those pesky foreigners have all been deported. Good thing we are also not too worried about the jobs lost in the city of London, now the banking hub is busy relocating to Frankfurt and Paris. Who needs the 9 billion in tax revenue the city feeds back into the economy annually?…  Still, it is what we all voted for, although for every 17 who voted leave, 16 voted to stay. Nobody explained that low-income families would be around 400 pounds a year worse off; that low-cost air travel could become a thing of the past, or that we are going to have to ask Trump to help us build a Mexican-style wall across the Irish border. Who cares that after the crash in the value of Sterling, there are plans in Scotland, to replace the pound with Irn-Bru bottle tops. Why worry? Our elected representatives seem to be doing such a fine job. That is when they are not swilling down ale in the House of Commons bar or slapping their secretaries arses and having them order up sex toys if the fake news is to be believed.

2 thoughts on “Down at the BREXIT Golf Club”