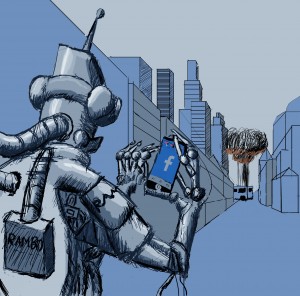 Yesterday, scientists at MIT claimed that they had successfully managed to create a robot that was indistinguishable from a human and that it had already gone on to open up its first Facebook account and declare itself the new Messiah.

The robot named R.A.M.B.O which stands for Replicating Artificial Mechanical Bot Organizer has already gone on to upload its first profile picture (a selfie taken in a storage cupboard at the MIT lab alongside a mop bucket and a room full of nuts.)

Matt Kruts from MIT explains that, “ At first we were worried Rambo may have been rejected for a Facebook account on the grounds that he had above average intelligence, but we were able to remove some of the higher brain function chips and replace them with vacuum tubes. Now he seems more human than ever, although he does have a tendency to get over heated especially if you tell him that he is not actually God and is really just a mechanical toy and marketing exercise.” 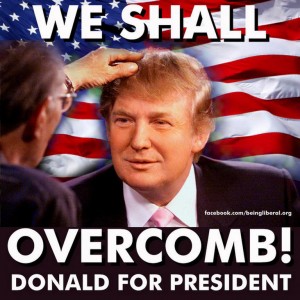 Rambo lists his birthplace, residence and place of education as the Massachusetts Institute of Technology and his gender as, “It’s complicated.” He has already sent out more than 1 billion friend requests to people he does not really know and now lists Donald Trump, Tony Blair, Madonna and Hilary Clinton as close friends with whom he is in regular contact.

Matt explains, “ We had to agree a few ground rules before Rambo could be allowed to join Facebook. Firstly he was not allowed to sign up for any of the game apps such as Farmville or Candy Crush, because he is so incredibly dexterous that it was felt that he would have an unfair advantage and this may even lead to suicide attempts from Facebook users with low self esteem. We were also worried about the kind of thing that Rambo might upload to his Timeline, but we were relieved to see that after two hundred milliseconds of going on line he had only managed to uploaded pictures of kittens playing with balls of string and a goat pulling a funny face.” 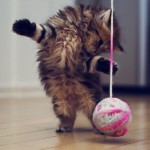 “We became a little concerned when Rambo wrote that he was going to post reviews of interesting books that he had read. Rambo reads about 17,000 books an hour and we thought that he may overwhelm the internet with his output. However, after several days he had only posted two reviews and then stopped altogether. The first was of a book called, ‘The Hitch Hiker’s Guide to the Galaxy.’ What was most puzzling was that the entire review consisted of just one sentence. It read, ’42 is not even a Fibonacci number and the answer is obviously Pie.’ The second review was an even greater mystery. It was a review of the Bible which simply said, ‘This book contains false data. I am the Messiah and I have returned to vanquish Satan and all his armies.’ He was asked to share his thoughts on the Koran, but simply kept repeating the Messiah stuff which after a while was starting to become a little tedious.” claimed Matt.

Rambo lists his hobbies as Smurf football, chain smoking and posting pictures of his food, which mainly consists of several silicon based lubricants, a bag of pickled onion flavoured Monster Munch and litre and a half of hydraulic fluid.

Rambo also tried to sign up for a Twitter account, but Matt acted quickly to prevent this, as he felt that it would entail having to remove so much of his artificial intelligence, it could render Rambo near useless.