Home »BREXIT»Springtime for Boris and Britain, Winter for Ireland and France

Is it too late to save Gotham City from Mr Freeze and the tyranny of Rees-Mogg’s penguin army? Can Fatman out-trump those pesky scientific climate riddlers? Will Boris-the-Joker Johnson finally steal Maybot’s crown and matching jewellery, as his wife drags him in a mirth-filled romp through the divorce courts of the land? Stay tuned to this channel, as these and several other imponderables are resolved in this exclusive article: Springtime for Boris and Britain, Winter for Ireland and France. 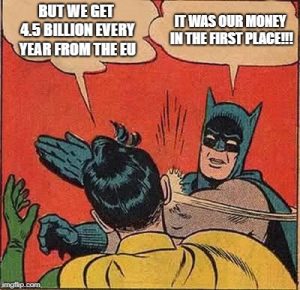 Let’s start by asking a simple question. Is BREXIT  ‘the Trojan donkey’ that made an ass out of us all? I think not. My reasoning is that this would be a little unkind to donkeys, who differ from your regular swivel-eyed politicians, inasmuch as they tend to be underpaid, adorable and hard-working beasts of burden.

So before I hear you say, ‘Why are you still banging on about Brexit and what has Batman got to do with any of this?’ You may need to steel yourselves, as I prepare to reveal something truly shocking…

Brexit was another half-baked wheeze dreamed up according to Twitter, by a corrupt, lying, cheating, ham-faced twunt and at the time, leader of the British Conservative Party, David Cameron. It would have been challenging to come up with something worse than allegedly placing one’s privates in the mouth of a pig, but with a little perseverance, he succeeded. 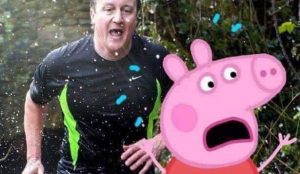 With the humiliation of ‘Piggate’ safely behind him, Cameron moved on to try and screw the once United Kingdom. This time, there would be plenty of witnesses to corroborate his foul deeds. Brexit was hatched in the exclusive private members’ club of St. James, where a cabal of his Etonian buddies planned to dupe the electorate with promises of ‘freedom’ from the shackles of Europe and the abolition of lollipop ladies. The process was enthusiastically endorsed by the equally porcine press barons, who unlike Cameron’s pig, probably did merit having his privates inserted into them. However, the primary goal was to not have their immense wealth fall under the scrutiny of new EU tax legislation. Hence the lurid headlines: ‘ENEMIES OF THE PEOPLE‘;  a breathtakingly crass shot at the high court from that lamentable tabloid, the Daily Mail, for having determined the absolute right of MPs to have a say on triggering Article 50.

We were told that the Leave campaign’s main complaint was that they wanted to assure the sovereignty of the British parliament, rather than be dictated to by Brussels. Instead, the learned judges of the high court should bow their heads in shame. They should respect the omnipotent authority of the manipulative press. They should be banged up in the Tower of London for being the treasonous dogs they obviously are. Oh, if only Henry VIII was back on the throne. We could hark back to those happy days and look forward to a good old singsong and post-torture public execution session down at Traitors’ Gate. Ordinary people could marvel at the majesty of their feudalistic government, whilst chewing with their few remaining teeth on a halfpenny toffee apple made in Somerset with apples totally not imported from those tardy French bastards.

I digress. After years of austerity, benefits cuts and piecemeal privatisation-by-stealth of a cash-starved NHS, voters were told that if they were feeling a little out-of-pocket, they should ‘take back control’ and leave Europe. Brexit was presented as a great exercise in democracy. Negotiations would be “the easiest thing ever” according to that lunatic, Dr. Liam Fox. Long-suffering NHS patients should at least be grateful he is no longer a practising GP, although I am told he still retains his collection of shrunken heads.

Prime Minister Theresa May nearly sprained a finger in her haste to press the Article 50 button and in a single stroke, confirmed all our worst fears: she really wasn’t afraid to press the nuclear button! Euro MPs must have fallen off their chairs in incredulity. Not since the first world war had such a group of pompous buffoons managed to coerce the masses into committing such an act of stupidity. Triggering Article 50 so early was akin to jumping out of a plane, then trying to negotiate for a parachute on the way down. Even the most dim-witted Conservative MPs knew this. So why did it happen?

I have a theory, which will have us all wondering how we managed to miss the elephant in the room: 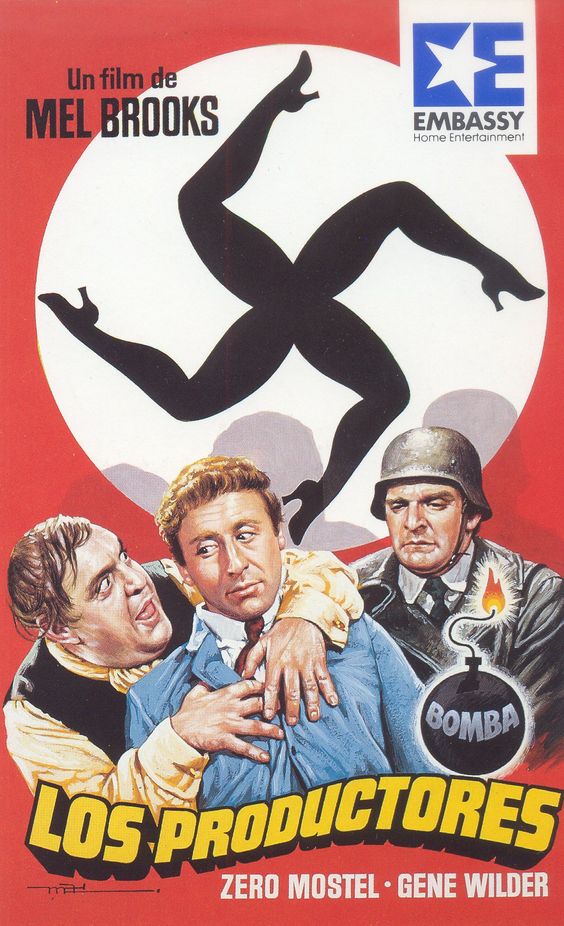 I submit that the Conservative Party Cabinet were such great fans of Mel Brooks, that they decided to re-enact his epic film, The Producers. The musical features the title song, Springtime for Hitler and Germany and in the origninal 1968 version then mockingly follows this up with the lyric, Winter for Poland and France. Brooks’ show recounts the discovery of an accounting fraud, which makes it possible to generate huge profits for the producers, provided the show is massively oversubscribed and fails at the box office. Failure was to be guaranteed by combining the least-talented actors with an extreme pro-Nazi scriptwriter. The casting of Hitler, for example, was given to an effete, song-and-tap-dance queen with the intent of recreating a Busby Berkeley-style, high-kicking spectacle.

Who in their right minds would want to sit through that, let alone pay money to see it! Better yet, the producers wouldn’t need to pay a bean for theatres or performers and got to keep all of the investors’ cash when it crashed. They even hired a blonde go-go dancer receptionist to distract investors from what was really going on. To this day she still reminds me of Boris.

Does any of this sound familiar?

May and the Hitler character of the film were made for each other. They even share a similar sense of dress. Hugo Boss would be proud. If you need a little cheering up after all that, check out the clip below from the 2005 version.

If the UK leaves without a deal, guess what: the producers of this Brexit musical get to keep the 48 billion divorce fee! I suspect that in the end, Brussels will find a way to make the UK pay. The fantasy of Brexit is exactly that: a fantasy. It will long linger in the hearts of those who voted to leave, if not in their minds. In Brooks’ film, the investors didn’t get their money back but those who masterminded the plot did end up in prison, sewing mailbags. It would be too much to hope that the same fate awaits the May Government.

The leaderless Labour Party should also shoulder the blame. Whatever happened to ‘Stronger Together?’ Won’t ‘global problems’ require ‘global solutions’? If it was such a great idea for small countries to go it alone, why hasn’t our imaginary friend, The United States, not already broken up the 50 states into independent countries with hard borders and tariffs between each zone? Without European protection, hard-won employment rights will be out of the window. The UK will become a Monaco-style tax haven, where tax-dodging operations such as Amazon are free to exploit its workers with impunity.

My final thought is that calling Brexit the result of a democratic process or ‘the will of the people,’ is the biggest lie of them all. I hear it nightly on the British news. “OK, we all voted for it, so let’s get on with it; let’s start jumping off the cliff together.”  My question is why? Can’t we have a bit of a vote, you know, to see if we still want to do it, now we know what is likely to happen? How is this democracy? Is this the same country an entire generation fought to save from the tyranny of a far-right Nazi regime?

Fed up with people like me droning on about Brexit day in and day out? Perhaps you are already wealthy and it will not impact you. Maybe, we will all be better off outside the EU and climate change is just a lie. Let me know what you think. I would love to hear from you. Leave a reply below.