Home »Humour»What makes me decide to go on holiday

With the remains of the Christmas dinner still warm on the plate, TV adverts featuring exotic destinations and bronzed size zero girls with impossibly white teeth start to appear during the holiday schedule. Spain, Turkey, Greece and sunny Blackpool all want to remind us, that it is time to book an escape from cold grey skies, driving rain and the weekend Harvester salad bar.

Do I really want to smother myself in Ambre Solaire and loll about on a fag-butt peppered beach? Hell yes, it has to be better than camping in the rain! 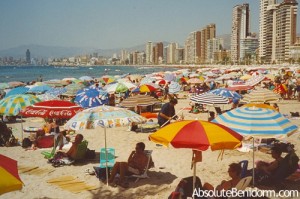 As the summer holidays approach, the world of bargain flights, cheap booze and the ‘all you can eat for 8 euros’ breakfasts beckon. What is it that makes over 6 million visitors want to holiday in Spain each year anyway, and then return to a life under leaden skies?

Is it the climate, the people, the atmosphere or a combination of all three? There can be no doubt that there is something special about the Anglo- Spanish relationship. Perhaps it is because of the relatively short flight time, but my own feeling is that it has more to do with passive acceptance that both the Brits and Spaniards alike need each other.

So, with this in mind I try to recall what a typical holiday would have been like, had I not already moved to the land of Bulls and Sangria. It is just a bit of fun, but the prize money is a key part of my business plan for survival in Spain. The other part is to buy a lottery ticket and then return home to watch TV.

In truth, I am not certain I am going to win the prize. Firstly, because the closing date for the competition has already expired and secondly, as someone who already lives in Spain, I can think of no earthly reason why I would choose to stay at home for a holiday. However, I love Spain and I like a challenge.  I want to do my bit to encourage tourism.  So what follows is fiction based on observation.  I hope it helps… 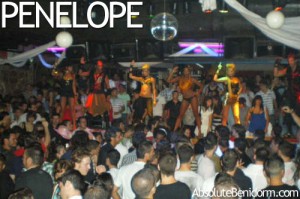 An image of Penolope, one of the most classy clubs in Benidorm according to AbsoluteBenidorm.com

An Irish disco pub can make an excellent starting point for any Spanish holiday or perhaps a beach side sports bar, where you can watch Arsenal play Man United on a plasma screen TV with an accompaniment of randomly selected “chill out Ibiza” themes belched from plastic dustbin shaped loudspeakers.

After 8 pints or so of over- chilled Tetleys imported bitter at the Iberian equivalent of the Coronation Street Rovers Return, thoughts turn to eating out “true Brit” style. Too much sun and alcohol may have given one the appearance of an over cooked lobster, but it is for a good cause. It is time to leave the homespun comforts of Ye Olde English Disco Pub, in favour of the more salubrious surroundings of the many international diners that huddle together on the boulevard. 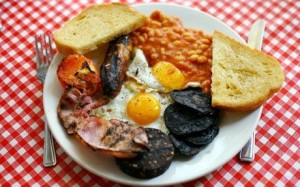 Some of the healthy food available for visitors to Spain

A gaggle of sea front restaurants and bars jostle in an endless scrum to attract the cash of passing holidaymakers. Neon lights flash tempting English sounding menus such as: sausage and chips, pizza and of course that ubiquitous cod and chips. “Is it North Atlantic cod?” I hear one customer enquire from his Hispanic looking waiter. “Ah sí Señor, of course! We are catching it in international waters with your Spanish owned British fishing boats.”

“Oh, that sounds nice.” he says with a slightly perplexed look. I can see him trying to figure out what this actually means, but at this point I get an uncomfortable epiphany on recalling that I too would have flown from a Spanish owned airport and paid for my ticket with money from my Spanish owned British bank. The British are not invading Spain, it’s the other way around!!!

I find it is generally better to choose restaurants which feature photos of the fine cuisine they plan to serve that night, printed out on wipe clean menus. This avoids the risk of accidentally ingesting anything foreign or smothered in olive oil that may adversely react with the mixture of beverages already fermenting below.

If the restaurant is full of large looking people, this can be generally taken to be a good sign, as corpulent Brits, (like myself), tend to be adept at seeking out true value for money. Another positive indicator is if the waiter greets you in a South London or Scouse accent, as there will be less confusion when you ask if they have any Newcastle Brown on draught. 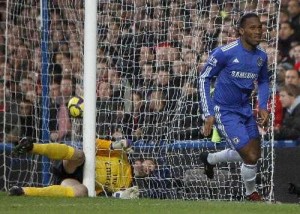 An example of Arsenal NOT scoring a goal!

Loud cheers as Arsenal score a goal in the bar next door! Suddenly, I realize that the place is full of local Spaniards, they love our British football. I start to worry about what will happen if Banco Santander try to buy Wembley, or maybe they already own it! Best not to think about such things and sup up, as it is almost time to go out on the pull.

A little money can go a long way on the Costa, especially if you are an enthusiastic drinker. You can also meet some gorgeous looking British girls, many of whom will probably be showing varying degrees of inebriation, and often a little more. However, you may also find yourself competing for their attentions with the likes of Juan or Miguel, who are young, handsome and Latino, and also out to make a score.

Now why is it that when us Brits try to chat-up a collection of seemingly available tottie, we invariably have to buy all the drinks? Juan and Miguel clearly have already mastered the art of having theirs bought for them. There is simply no justice…

Time I think to drift back to the apartment, but not before stopping off for one last night cap or swaying past the El Kebabo Mega Snack for a final bedtime sandwich.

If you end up with your head down the toilet, you could be forgiven for thinking that the night has ended badly. The others have gone off clubbing with newly found friends Sandra and Alexa, but what may be of more concern, is their eagerness to bring their three Moroccan looking brothers.

Not my worry now. Who knows what they have planned, either way it is not for me and I couldn’t help but notice that Alexa had the legs of a man in size 10 stilettos and spelling mistakes on her tattoos. Memory can be unreliable, but I think it would have been better had I not kicked off my drinking at the Terramitica theme park. Note to self, “remember to use stairs on the way back out.”

Perhaps in the morning things will feel a little better. After all, there is always the “All you can eat for 8 euros breakfast” served with Sunny D to help clear your head in time to start all over again at lunch time.

Who’s for cocktails? Make mine a “screaming orgasm!”