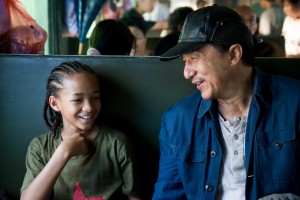 I truly believe that all bullying problems can have one solution. Karate! Before you laugh or dismiss the idea, keep in mind that this is not just based on my own experience, but also countless others who have found themselves on the same road. Simply put, a working knowledge of martial arts can provide a decisive solution.

I experienced bullying myself whilst at school, but in later life when I found that my own children were also being intimidated, my partner and I felt that something had to be done. We spoke to the school, who took the matter seriously, but problems persisted and in the end we came to the conclusion that the only way forward was to deal with it square on. Our boys needed to learn the skills to deal with school yard bullies.

Karate is not always an obvious solution. Perhaps, it is because not everyone is sporty or maybe they have a dislike of activities which involve physical contact. Understandably parents can also be put off by media portrayal of action heroes dispatching bad guys on the big screen. I would counter this by saying that for most karate students, it simply does not work like that. Many of the students I train with appear to be very ordinary people. Of course, they are not, as when you start to learn a martial art, the whole way you see the world changes. More on that later.

My point is that whilst self defence is an important element of karate, it is more about self improvement. When I look at my fellow students, I generally see people who are strongly goal orientated, rather than people who enjoy a good fight. They are seeking to overcome their own personal, physical and mental challenges. For young beginners, their principal challenge may well be to learn to overcome a problem of being bullied at school. However, for most karate students bullying is the last thing they worry about. Younger karate students soon find that the confidence they learn when training no longer makes them attractive to bullies.

Aside from the self defence aspects of karate, there are many other reasons why everyone should learn a little about martial arts. There are significant health benefits from the vigorous exercise regime that goes hand in hand with the training. Of course, you can get fit by attending a gym, but karate also gives you life skills, such as focus, fast reactions, in addition to improvements in quality of thinking. There is also great social camaraderie between students.

My children trained in karate for years before I started myself and I saw immediate benefits. It was a win win situation. The boys learned how to take care of themselves in the playground and I got a couple of hours two or three times a week, when I could go and enjoy a quiet drink with my partner. This was all working out just fine, until one day I came face to face with a bullying problem of my own.  After a falling out with one of the agents I worked for, I received a visit at my family home from the client and his associate.  He was a big guy and made serious threats.  This was totally unexpected and I found myself fearful and intimidated.   I could not work and felt like my life was falling apart.

The turning point came when I decided to do something positive to counter a new wave of negativity that had entered my life. Instead of going off to a bar whilst the children trained in karate, I could train with them.

From the very first class, I learned that practically everything I thought I knew about karate was wrong. My ideas were derived from watching old Bruce Lee and Jackie Chan movies. Then there was the Karate Kid, written to pull on the heart strings, but essentially still a story of retribution and revenge. Deep down I still wanted to retaliate against the guy who had threatened me, but instead karate gave me what I actually needed, self respect.

You really cannot expect others to respect you more than you respect yourself. You learn to act in a way that tells bullies that intimidation is not going to work. You learn to walk into a room with a straight back and your head help up high. You also become strong and learn a type of self defence which would give even the toughest aggressor an extremely bad day. However, you are far less likely to call on these skills, if you do not act like a victim in the first place.

So there you have it. Karate is a solution to bullying for all ages, but the benefits go far deeper. For children, they learn to have razor sharp focus. They learn to become more disciplined, but not in a repressive way. They develop confidence and their friends look up to them. For us older people, karate helps keep us young.

For me it was an emotional moment when my children voluntarily went up to speak to their senior instructor and thanked him for helping solve their bullying problems. They are both passive, kind and sensitive young people, but being a nice person does not mean that you have to put up with being intimidated or abused.

I sometimes wonder what would have happened if I had the karate skills I have now when I was confronted by my own aggressor. I mentioned this to a friend who has been a black belt for over 25 years. He said that he was always getting into fights before he started karate. Then it just stopped. My friend didn’t think that I would have ended up in such a confrontational situation, but if I had? Well, that would have been interesting! 😉

You can find out more about karate both in Spain and the UK here:

If you have a view about bullying or would like to share your own experience, please feel free to make a comment by scrolling to the bottom of the page.