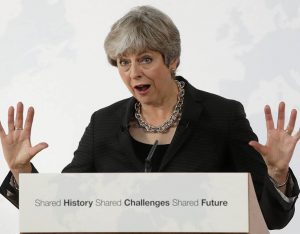 Yesterday I sat through a five-thousand-word speech by British Prime Minister Theresa May.

It was an hour of my life I will never be able to live again. In truth, I wasn’t expecting her to say anything that would add to the rehashed arguments about the state the UK now finds itself in. Nevertheless, I was interested enough to see how the UK was going to brace itself for the impact of the impending train wreck of only a year remaining within the EU. In my previous article on June 24th 2015, I forecast most of what has come to pass: the twenty per cent devaluation of Sterling, the loss of industry to Europe and the plight of expats living in Spain who found themselves disenfranchised from their mother country. I forecast the long-lasting damage to the British economy, the downgrading of the UK credit rating and the impact on young people through the blow to education, due to loss of EU subsidies for research and innovation.

What I didn’t see, but in retrospect should have, was how quickly the rats would leave the sinking ship; a ship they had so effectively managed to scuttle, by forcing the triggering of Article 50. The insufferable Nigel Farage, resigned, claiming his work was done.  David Cameron’s ludicrous plan to strengthen the Conservative party with a popular vote backfired spectacularly.  The architects of BREXIT couldn’t believe that the British public had actually bought their lies about the huge savings that would be made; the unbelievable 350 million a week that would now go to fund the NHS.  Those of us that pointed out the crass stupidity of the ‘leave’ argument was vilified and accused of proliferating project fear;  as good a name as any I suppose.  We should all be fearful, but perhaps project truth would have been nearer the mark.

Now the UK suddenly finds itself being likened to North Korea: both hermit states, both countries led by egotistical sociopaths and both ridiculed by the rest of the world.  Theresa May’s less than sure-footed leadership resulted in a wasted year of EU negotiation, leaving her begging for an extension to the doomsday countdown.  Now, with a weaker hand than ever, the UK is crying foul. The EU wants to play hardball and it’s not fair.  Who would have thought?  Never mind, at least we have a great new trading opportunity with Trump’s America.  If indeed they are able to negotiate a trade treaty with the US, British citizens can look forward to chlorine-washed chicken dinners and genetically modified crap in all of their imported food.  However, I don’t hold out much hope.  Having witnessed the dim-witted performance of David Davis, I am left wondering if a trade deal with anyone anywhere is even possible.  The British BREXIT negotiating team are faced with a monumental challenge, but they appear to lack the most basic skills. Instead of listening to the other side and working out what they can put into the deal to achieve what the UK wants, we are instead engaged in the collective monologue, where both sides speak at the same time but hear nothing.

So what of the speech itself?  Firstly, my thoughts went out to those who were forced to endure the self-indulgent sermon, whilst perched on what appeared to be hard-wooden, collapsible chairs.  It was a vacuous speech full of platitudes, but really could have all been summed up in one phrase: “I want to lead the UK as it jumps off a cliff, so please help me.”

The proceedings reminded me of a funeral for an old friend.  Theresa dressed completely in black, gave a eulogy for the body in the casket. It was, of course, a speech for our dead friend, the Anglo- EU relationship.  Her body language lacked any shred of conviction, her words sounded hollow and yet they were delivered with a petulant sense of self-importance.  Who was listening?  A few UK news channels gave the speech air-time, but the rest of Europe mostly ignored it.  They already know the UK is leaving and are busy getting on with the rest of their lives.  They are over it.  I saw very little coverage on the Spanish news, which for the time being is more concerned over the illegal independence vote for Catalunya.  Will the UK be given more time to leave?  Almost certainly, provided it stumps up at least 40 billion in hard cash.  I am guessing that this will be money not going to the NHS.