“Oh, but don’t ‘smartphones’ have search engines powered by big G?” Yes, but punters don’t want to watch ‘paid for’ adverts! There is no room on a smaller screen for adverts anyway, and even if there were, they would download an App to kill them. HA HA! Manic laughter from the basement.

Another fascinating irony of the new age of technology is that bands are now having to get up off their ar**s and go out on tour, as it is the only way their destitute record companies can scrape any money from them. Ever since you could download absolutely any music from the internet free of charge, there has been little financial incentive to actually record anything.

When I worked in the concert production business (shortly after Stone Henge was built) I recall tour budgets being slashed year on year. When I spoke to record companies about this they would say that for the same money it cost to put a band on tour, they could make a video and broadcast it on MTV and reach 7 million more listeners who would then buy their records. It got to the point where bands spent so much time in the studio and making their crappy pop videos that when it came to doing the tour, they did not have a clue! So Mr Bond, or should I call you Mc HMV, EMI VIRGIN, LET’S GET THE HELL OUT OF HERE records. Not selling too many records now are we? Let’s talk tour budgets. TOO LATE!!! We have all sold up and gone down the beach whilst waiting for you halfwits to ring us. 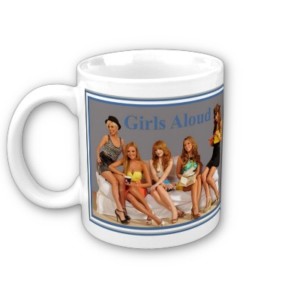 A Girls Aloud mug! A class act and probably the best chance record companies have of making money from this immense talent.

So how do you promote your average 2012 – 2013 pop band? Well my first question would be,”Why bother?” They don’t need you, as they are quite capable of releasing their own material for the rest of the world to copy free of charge on Itunes without any help from record companies.

Still media manipulators can make money in other ways. How about a nice made- in- China mug with a picture of the latest Fab Girls Aloud clone. I would not mind betting that some of them may even have had to learn to play their own instruments. Cool!!!

If you disagree or think the future of the music industry is bright or even orange, why not post a comment and tell us all about it?

1 thought on “Cool future for techstocks and music”