Home »Living in Spain»Gota fría storms in Spain. An explanation! 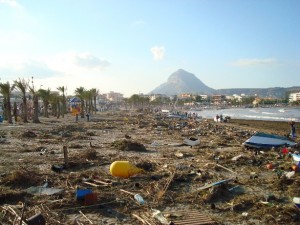 I had never heard the term,’ gota fría,’ until I came to live on the Valencian coast. On arrival, I recall looking on and being impressed by ancient ravines carved into the dusty foothills of the Sierra Bernia mountains.There were unusually wide and deep gullies on either side of the main roads, one of the many hazards associated with motoring in Spain and guaranteed to work wonders for the suspension of any car, should you be unfortunate enough to drive into one.

The Iberian peninsula is such a dry area, it seemed improbable that there could be a problem with heavy rainfall. After all, the desertification of the Mediterranean coastal provinces has been increasing year on year. The land is becoming dryer and less capable of supporting plant life. The topsoil is being eroded away by the actions of wind and the baking sun. The Sahara has been dumping sand on this coast for millions of years. A shortage of water? Definitely!

Yet despite so much sunshine and dry air, heavy rain can be a serious hazard for the Costas’ a problem which can and does result in fatalities. Paradoxically, more people drown in desert areas due to flash flooding, than actually die of lack of water. Last week, we heard the sad news about an English couple who were swept away and drowned whilst enjoying a cup of coffee in a market side bar near Benidorm. How can this happen? Why does it happen?

These events will be of little surprise to the local community, who almost every year have to endure a severe weather phenomenon known as the ‘gota fría.’  It translates literally as ‘cold drop.’ The term, ‘gota fría,’ has passed into the local language and is often used to describe any heavy downpour. However, a gota fría is more than just heavy rain. It is something which affects many of the coastal towns, especially those on the Valencian coast, where Easterly winds (levante) the most common in the region, can ratchet up the intensity of these extraordinary events.

The problem is not just confined to the western Mediterranean during autumn to spring, as gota frías can also occur on the Atlantic coast in the summer months.The challenge is, that they are notoriously difficult to forecast. However, a real gota fría will result in closed roads and whole communities being cut off, whilst power and water outages add to the misery. 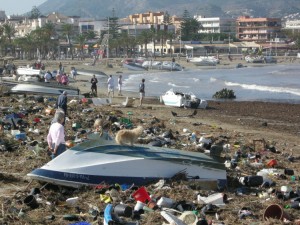 Extensive damage to the Arenal marina following the gota fria

A gota fria can come about when a specific set of weather conditions are in place. Like a hurricane, a gota fria derives its energy from the sea. Usually rain bearing clouds and warm, moist air build up off the coast and start to move inland. If this weather front is met by a layer of cooler air sitting over the land, the progression is halted. The warm, moist air then starts to convect upwards, where it cools and precipitation takes place. In other words, it starts to rain. Nothing odd about that though.

However, the progress of the weather front has been stopped and more and more wet air piles in behind, ramping up the circulation intensity. Warm air can hold a higher amount of water than cool air, so as the warm air rises and cools, it can no longer hold on to the water within and precipitation starts. When this happens rapidly, the rainfall can be heavy, but the real damage is done by the weather system being prevented from moving away. Heavy rainfall will continue unabated until the warm, wet air has been completely exhausted. You can see that even quite small and normally innocuous depressions can cause serious problems if they are locked into this type of weather pattern.

There have been a number of examples of particularly devastating gota frias over the years. One of the worst was the 1981 gota fria in Almeria, where persistent rain caused rivers to break their banks resulting in wide spread damage and a number of deaths. Flooding in Alicante in 1982 and then again in 1997 also caused loss of life. More recently, Almuñecar and Nerja in 2007 and Alcalá de Guaraíra also in 2007.

What should I do if I am caught up in a gota fría?

The main advice from the Guardia Civil is to stay at home.

Above all, do not panic. The rain will eventually pass and very quickly things should start to get back to normal. The one thing you should not do, is go out in the car to try and take photos or buy last minute provisions.

You may find yourself cut-off and unable to return home.