Hands up all those who were taken in by the great Facebook (it’s gotta be a bargain at any price) IPO. Institutions such as banks and fund managers usually pile in on these occasions, but what apparently has taken everyone by surprise has been the retail interest. Ordinary people have been attracted like moths to the light on the front of an oncoming train. In my view, these early buyers would have been better off investing in Greek Treasury Bonds, but then again, my love affair with the stock market ended years ago. 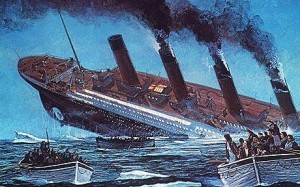 A new book claims that the Titanic had plenty of time to avoid the iceberg, but the helmsman panicked and turned the wrong way!

It would seem that if you have a Facebook account, you should also buy the shares, oh and the damn T-shirt, but don’t say you weren’t warned! If you are looking for somewhere safe to put your money, I have heard that the Spanish government is now actively looking for 19 billion to invest in one of the country’s leading banks.

Bankia apparently still has an amazing property portfolio. One slight worry is that Bankia say they actually need 28 billion. Interesting that up until relatively recently there have been few acknowledgements of a liquidity problem in the Spanish banking sector. We all knew that the storm clouds were gathering, but my question is, what else have we not been told about?

There certainly seems to be bit of a problem funding schools, but that is OK because the first thing you do when you have any money is educate your family privately. The logic follows that you should really only pay the minimum that the proletariat will let you get away with (without forming lynch mobs), as you are already paying twice through taxation. The same goes for the health service.

I am beginning to suspect that just as with the Titanic, those that have made a real hash of the economy are going to sail away in the lifeboats, whilst leaving the rest of us to drown in the inky black, icy waters of a failed global economy. Only in this scenario, the captain does not go down heroically with the sinking ship and there is little room for extra passengers in the lifeboat. After all, they need the space for your pension.

On a related topic. Do you Remember ENRON? A friend in my old investment club spent a great deal of time telling me that the only style of investing that produced results was value investing. Forgive my scepticism, but why should we believe a word printed in the balance sheet or those company reports? Too many interested parties standing to make too much cash by being economical with the truth. Sounds familiar?

At the timeI had become interested in technical analysis, but I soon found that whilst in theory it was possible to spot unusual trading volumes in lightly traded stocks, understanding them was a different matter. Then there was the problem with the efficiency of the markets. This theory is one which I believe still holds true today. Market efficiency suggests that everything that is known about a stock is already accounted for in the price. Of course the most efficient way to trade is to trade on insider knowledge. Does this happen? Hell YES, but unless you are friends with Bernie Madoff, you probably haven’t been invited to the party. 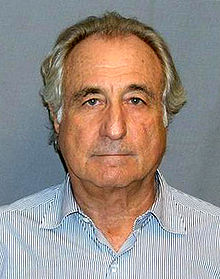 Bernie Madoff showed how easy it was to fool experienced investors into parting with their money.

The problem for all us ordinary investors is that non executive shareholders are almost without exception the last to find out what is really going on inside huge companies such as Facebook. One thing you can be sure of though, is that the people whose job it is to manage these flotations are not worrying about how rich you are going to become by investing in them. They are merely concerned about ensuring the maximum gain for themselves and their clients.

After the initial flotation, there is nearly always a shake out. Share value often fluctuates wildly before settling on a curve which I predict in this case will be mainly downward. At this point, the retail shareholders will be shaken out and institutions will move in to mop up the shares at the new closer to real value price.

The first warning sign that something was wrong with the Facebook launch came when the initial price was revised upwards by 25%. To ordinary people this is meant to signal that the train is about to leave the station. You had better be on it or miss out on the gravy. However, to hedge fund managers, this would have flagged a selling opportunity. Lawsuits are already being prepared which will claim that certain hedge funds were given inside information that the financials, as stated, may have been overly optimistic. Perish the thought!

Human nature has changed little over millions of years of evolution and the greed of Wall St will continue unabated or until someone notices that the emperor actually isn’t wearing any clothes.

I no longer waste my time on share dealing. This is after all a market which favours crooks and economic gangsters. That is not to say that you can’t still make money trading. However, one of the few things I really did learn in my short time as a trader, was that when people are rushing to buy, you are better off selling and when they are selling, start buying.

A trader friend used to offer courses in trading on the Costa del Sol. He said that in order for students to be accepted on to his course, they must first go to the cash point, draw 500 Euros out and then give it to the first person they met. He believed that it was only after being able to detach yourself from the emotional roller-coaster of fear and greed (the lifeblood of all financial markets) that you stand a chance of making it as a trader in the great Wall Street casino. A casino which remains void of any meaningful regulation and where the odds are genuinely stacked against you.