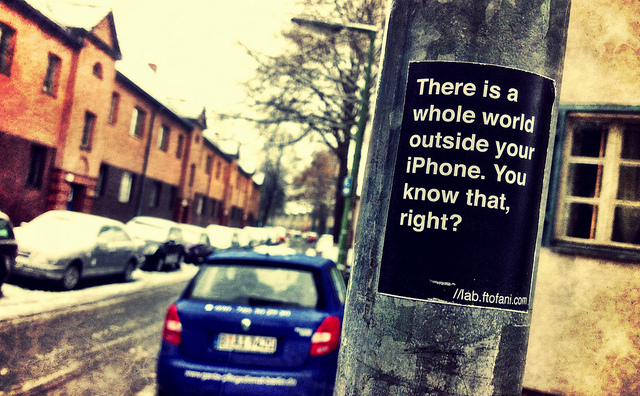 Looking through the traffic which wends its way through our mail server, I am starting to feel that we are regressing back to our original primeval state. Having dispensed with the formality of saying, “Hello.” or, “How are you?” and abandoning any attempt to endear themselves, emailers simply blurt out the thing they want.

Mail of this sort rarely starts with, “Dear Sir,” or any kind of introduction and usually ends with the message “sent from my iPhone, Blackberry or some other inane device”.   Karl Max once described religion as “The opiate of the masses,” but had he been around now, he probably would have said it was the ‘Smartphone’.

I continue to worry about what kind of world my children are growing up in. Apparently it is OK to just say, “Give me!” We no longer feel the need to say, “Thank you.” or show appreciation. 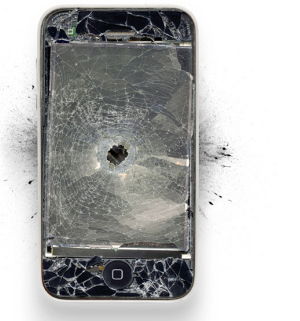 Perhaps it is one of the reasons that I have a dislike of the iPhone.  It has become a kind of unfortunate status symbol. Even quite rational people act like complete idiots when their phone starts to play some moronic ringtone. They have succumbed to the hypnotic charm of the consumer driven device with the super thin shiny screen. It is the call of an inanimate object craving the attention of inanimate people and yet strong enough to distract from the matter in hand, even whilst driving.

I once noticed a parent play video games on his phone whilst the teacher of his son addressed a gathering about the forthcoming academic year. However compelling his son’s education may have been, the power of the mobile phone was greater and had already won the battle for the limited resources available from this father’s smart-phone impaired attention span.

I believe that Apple are at least in part responsible for making us more like chimpanzees than people. Their products are devices where we just point and poke at the the brightly lit pretty thing on the screen! No need for a keyboard or any kind of meaningful input. The ability to stab at a piece of iridescent glass is now sufficient to get us what we want. That holiday, that thing ordered on line that no one needs and yet costs twice as much as it used to in an actual shop.

I know that much of this makes me sound like a bit of a Luddite (go look it up on Youtube) , but really I am broadly in favour of innovation, as long as it is not accelerating a collective move towards total brain death! I noted with interest that last week Apple actually had to publish an apology to the people of China for their lame customer service and failure to uphold any kind of useful warranty. China may well have some way to go with regard to issues of human rights, they are on the whole a nation that understands the value of respect. Chinese people expected higher standards than those offered by western controlled Apple. No apology was forthcoming to the rest of the world.

Respect is one of the many reasons that I love karate. We show others respect, humility and learn to open our minds to knowledge. Contrast that with the world outside the dojo, where apparently it is OK to steal 60% of people’s savings to bail out a corrupt banking system. It is a world where people’s greatest interest is themselves. You can be certain that none of the politicians who voted for the Cypress savings theft would have had any money in the accounts which were to be the subject of the sequestrations.

To return to the original theme. I am starting to believe that the ignorant email is just a symptom of a more widespread illness. Failure to take responsibility for one’s health, education and community for example. Here in Spain I often see smokers carelessly toss discarded cigarette packets out of the window whilst driving. Why should we be surprised by this? They do not care for their own health, so why should they care for the environment they share with others?

Ours is a selfish society, an ignorant society and yet we are not all so rude. My guitar students always remember to thank me after the lesson. I appreciate this and work all the harder to ensure they get the greatest value from their lessons.

When I return to my desk, the mood can soon change. The ‘Inbox’ contains a myriad of emails, from people who I have never met and who are not interested in learning anything. They want what they want and they want it yesterday and for half what it costs to produce. They do not want to exchange pleasantries, after all I am nothing to them.

Does rudeness really matter? I think it does, because the way you lead your life is your message to the world. For me, the whole smart phone, dumb phone debate raises some interesting questions. We now have a whole generation that is being subversively controlled and held back through rampant consumerism and the desire for non existent status wrought through the transient ownership of a little shiny screened smart-phone.

Now I am betting that most readers of this would probably say that this is not typical of their own behaviour. You may be right, as after all you ARE actually reading. Those that have lost the desire to read will have to wait for my nine second Youtube video to come out called, “How to make fire by rubbing sticks together.”

If you are one of the gazillion people who who have fallen in love with these products and think that I have got it wrong, why not share your thoughts with us and leave a comment, or maybe even share a nine second video…