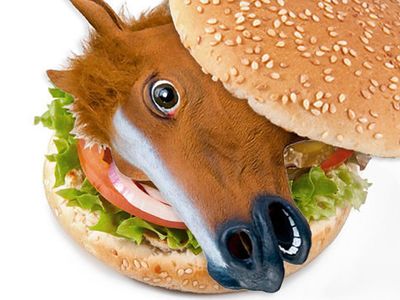 After being turned down as a blood donor in my home town here in Spain, I decided to Google what could be done to lower blood pressure without the need for further medication. Actually, I am pretty certain that they would have taken the blood had it not also been part of the constitution of someone who had lived in the UK during the 1990’s period of hysteria over BSE.

Companies such as Tesco (every little helps) and Sainsbury’s were busy serving up UK residents ‘food‘ that had been outlawed in the rest of Europe in 1988 and continued to do so with impunity until as late as 1993. Later we were to learn that meat eaters were also treated to the delights of ground up horse and anything else that was unfortunate enough to wander into the abattoir on the day they just happened to be making burgers. Hence my proposed Tesco advertising slogan, “just say neigh to horse-burgers.”

Giving blood should be easy and for many it is, but the process inevitably involves answering lots of awkward questions about activities you may have been engaged in before rolling up to part with the red stuff.

I filled out two sides of an A4 sheet containing said embarrassing questions. My wife helped with translating some of the medical terms, but at this stage I was already starting to feel a little uncomfortable with the whole process. It is surprising the diversity of things people can get up to and still consider themselves suitable candidates to give blood.

The form was duly completed and handed in and I confidently waited my turn to give blood, but instead I found myself being called for an interview by the doctor managing the clinic.

“You are English, yes? You lived in UK during time of BSE?” Well, yes on both accounts, but I explained that I had been a vegetarian for the last 18 years and that if there was anything nasty in the blood, surely my British love of alcohol would have long killed any remaining mad cow bugs. My levity went unnoticed as the blood pressure cuff was yanked on to an outstretched arm. The machined whirred away and I felt the grip tighten then slacken as it bleeped and spluttered its final verdict to the doctor who was by now already grimly shaking his head.. “ Muy alta!!! (Very high!)” he exclaimed as he scribbled on the form I had so painstakingly filled out moments earlier.

I stood up to leave and as I opened the door to start my walk of shame, I noticed him peering down the line to see if there were any other foreigners waiting to waste yet more of his time. The crowd standing in the waiting room parted to allow me through. They had been busily chatting but lowered their voices as I made my way to the exit. “ He must be one of those gay drug taking foreigners that are draining our world class health service.” I imagined them saying, but instead an elderly lady took my arm and said, “ Don’t worry. I expect it was high blood pressure.” It raised in me the hope that I could probably deal with the blood pressure issue and maybe one day return to give blood another time.

The next day, I called in at the doctors’ surgery to ask if I was really so sick that my blood could only be used for engine oil. He looked at me and asked what my blood pressure was. “ I don’t know.” I replied. “Isn’t that something that you would measure?” Our doctor is a kindly man, but I have the feeling that he does not take me seriously. “ Well, I can measure it, but the last time I did that the readings were improbable.” As he sat back in that special chair that only doctors seem to have, I noticed that there were half a dozen large cans of extra strong anti cockroach spray on the floor next to his desk. I was obviously not the only problem visitor to his surgery that day.

PART 2 – How to reduce blood pressure?

It seems to me much of the information on the web is not only wrong but has been placed there without any proper clinical research to back it up. On the basis of most of this advice already being hearsay, I offer my top 10 tips as a possible solution to your blood pressure problems. If you die as a result of following this advice (I am obviously talking to relatives here) don’t come chasing after me for money. Your loved one was probably already sick, otherwise he / she would not have been paying any attention to this website in the first place. Besides, I don’ t have any money and am also busy trying to limit stress by both not answering the phone or reading email.

The first thing we are told when we ask how to lower blood pressure is that we should avoid stress both in the work place and home. You need to jack that high flying job and fill out a McDonalds short order chef application. Remember NO RESPONSIBILITY is the key! Why not take up Jazz guitar, where you will seldom have the stress of gigs and should one come your way, chances are there will be nobody there to bother you and thereby raise your blood pressure.

Possible suggestions for low stress employment include:
Working in a library.
Call centre customer service operator for Orange. No, really, they don’t ever answer the phone! They simply play relaxing music for their millions of patient and satisfied customers, whilst intermittently telling them how important all their calls are.

Roller Coaster holidays
Skydiving, base jumping and bungee jumping.
High stress activities such as going on fetish holidays or joining the Priesthood.
Air traffic control (France being an obvious exception) as when there is too much air traffic they all go on strike and saunter down to the beach whilst their Union barters for higher wages.

Consider:
Anger management therapy, but don’t tell your therapist to F*** Off if he turns up a few minutes early.

Reduce salt in your diet, unless you sweat a lot or live in Spain, in which case you will need salt to replenish that lost through frequent tears of frustration.