For a short while I earned my living as a derivatives trader and set up tradinginspain.com.  It started out as a hobby, but then grew into a full time occupation. The trouble was that I soon found that relocating to a foreign country and running a trading account were not conducive to a stress free life! 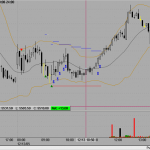 The first indication that things were not going exactly to plan came when some early trades were rejected by the exchange due to bad line connections. I had naively assumed that my new location in Spain, a modern European country, would have similar communications to my home town in the UK.  Not so!

Things quickly got out of hand in the post 9/11 and Madrid terrorist bombing instability.  I was discovering that trading as a hobby was one thing, but when you had to rely on it to earn a living, this was quite a different matter.

On the days when the phone line worked, but there were no trades, I would chat on-line. I wanted to feel the pulse of the market and react quickly to changes in sentiment.  I used this time to develop exchange data analysis software, to assist with the buying and selling decision making process.

After a while, it became clear that people who really knew how to make money, did not go on-line to boast about how they did it.  Sure, some would use certain indicators, but most were just natural gamblers with nerves of steel and a good understanding of market psychology (mainly fear and greed).  They rarely posted on chat groups about their gains or losses. Neither did they run classes on ‘how to trade’.

When people told me that they were starting out in trading and asked for advice, I would be reluctant to comment.  Nobody wants to rain on somebody’s parade, so I used to wish them luck, but remind them to have a good plan B.

The concept of getting something for nothing, as opposed to “sweat money” which is what we traders used to call actual work, can at times be very appealing. This mindset of eternal optimism has always been enough to pump a steady flow of new blood to the real winners of the equity markets, i.e. brokers. 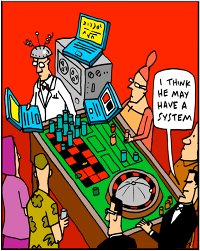 My persistent attempts to build a mechanical trading system were going nowhere, although there was no shortage of customers for my work.  It had not occurred to me that if it was possible to build such a device, every major investment house in the world would have programmers working on it 24 / 7.

Like the alchemists of old, who plied their trade by trying to turn lead into gold, the in built mystique of a trading system is just too compelling to be ignored by the scam merchants of today.  People are all too willing to suspend rational belief in favour of easy money generated by an automatic trading system.  The argument went something along the lines that a mechanical system removed the human emotion from the decision to put on a trade.  After all, we all know that most crashes are caused by human error.

I had a friend, who in addition to using my own software, bought one such system in order to trade treasury bonds.  Money was required in advance to buy a few pages of technical instructions.  The system was given to me for further analysis.  I was surprised to find that it was indeed capable of producing significant gains when tested against historical data.  However, these gains could only be made provided you were rich enough and foolhardy enough to run massive losses in the down swings.   This would have required posting such huge amounts of margin (money required by your broker to keep a losing position open), that you would have had to have already been a millionaire in order to use it.

The principle assumption of making money with the system, rested with the belief that the bond market would continue to behave in the future as it had done in the past.  This obviously is not the case at the moment!

Clearly the mathematics of chaos play a big part in the seemingly random nature of markets.  Just like counting waves, when you think you can predict that every seventh wave is going to be a big one,  you suddenly find it is now the sixth or eighth.

All of my trading systems eventually started to conform to the law of the casino, where the odds favour the house, or in my case the spread (the difference between the sale price and the buying price).  On a roulette wheel, the zero is owned by the house and gives them a 2.7 percent advantage.  It is enough to create the illusion at times of being able to sustain a lucky streak.  The problem is that the more the wheel is spun, the more apparent the house advantage becomes.

I should mention that 2.7 percent is the house advantage on a European roulette wheel.  The American wheels have 38 slots rather than 37, allowing for two zero positions,  giving the house a 5.6 percent advantage.

There is a saying “that a fool and his money are soon parted“, but if you must gamble, you will lose a little slower in a European casino.  Compare that to placing bids directly into the derivatives markets, where traders can have net assets greater than some third world economies.  Add to this the miracle of the Spanish telecommunications, the activities of the likes of al Qaeda and the biggest global economic downturn since the great depression and you can see how it could all easily end up in tears.

When I arrived in Spain, just like the newbie traders, I wanted to post my success on chat boards.  I would not mind betting that many people do the same when they start a new life abroad.  It is only natural that they are going to want to tell people all about it.  After reflecting on this behaviour some years later, I realized that this is not what your friends in the old country are really wanting to hear from you.

Nearly eight years on, there is no longer a point to prove and therefore no need to chat about the lifestyle on news groups.

Going on to chat groups or social media websites such as Facebook to find answers to your most pressing questions is probably a waste of time.  There you will likely find plenty of chatter, but little substance.  If you are thinking of starting a life abroad, I recommend taking extra time to visit the country, seek out people who have been around a while. Find out what the main challenges really are, as despite what your estate agent says about being your new found best friend, they really are only there to sell you a house.

Secondly,  have a good plan B, you are probably going to need it, because it can be impossible to predict what is going to happen once you get started.  If someone tells you that they have a ‘can’t lose’ trading system, don’t waste your time with them, as it exists only in dreams.

If you are seriously looking to make money out of the equity markets, you need to remember only three things.  Buy low, sell high and choose commodities with long established trends, such as oil and gas or gold.  Then be patient, as day trading is seriously only for hardened professional gamblers!

Avoid speculation in the currency markets, as the leverage can be so high that any instability can end up closing both bullish and bearish positions. Do not open spread betting accounts unless you enjoy playing in casinos where the odds are always stacked against you.

Finally, don’t be afraid of the challenge of doing something interesting.  Life is not a rehearsal…