I recently saw a short documentary about an organization called Synergy who had set up a working party for a conference in Tibet.  I may have missed some of the finer detail due to my limited Spanish, but as I watched, I became fascinated by a short statement made by the Dalai Lama when he addressed the group at the end. 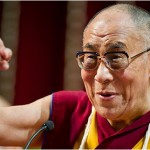 His Holiness the 14th Dalai Lama

My understanding was that he did not want to gloss over the problems of Chinese oppression in Tibet, but he saw this as symptomatic of a far greater worldwide issue.  What caught my attention, was when he started to talk about the nature of generocity.   “To give someone something,  or help them, the giver actually receives a benefit also.”

The benefit is that you define yourself by your actions and if your actions are for the good, then you become a better and more spiritual person.

Words, even those spoken softly, can be threatening to any authoritarian regime.  The plight of the Tibetan people is clearly linked with the respect and love they have for their spiritual leader, the Dalai Lama.  For me, this seems a little odd, as how could the inhabitants of such a small country possibly be of any threat to China?

Perhaps the answer lies in ideology.  After all, ideas, like the universe itself, can be big. China’s rulers understands this, and must be looking on with some discomfort at the popular uprising and changes now taking place in Egypt and Libiya.

“Most men lead lives of quiet desperation” according to the American Writer Henry David Thoreau.  This could go some way to explaning why we spend so much time trying to accumulate wealth whilst thinking little about helping others. 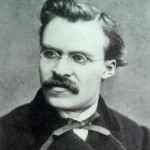 The German philosopher Friedrich Nietzsche, for example, used to wish that bad things would happen to all his friends.  By overcoming adversity, they would become better people and in turn become better friends.  Mind you, with friends like that, who would need enemies?

This got me thinking about the difficult situations which seem to crop up in all our lives. How would the Dalai Lama or Nietzsche deal with the awkward situation of passing a homeless person or beggar in the street on their way into the supermarket.  Would they give money?  They couldn’t give money to all of them, there would be none left!

Based on casual observation, I am guessing that most do not, but I do like to give something myself, if I can.  When I do this, some people with me are embarrassed by my behaviour and can be quite critical.  They will remark, “this guy probably has a 4 wheel drive at home”, or “they will only use the money to call a dealer on their cellphone to buy drugs”.  Durrr, I never thought of that!!!

Children are less questioning though.  If they have some money, they will often give it, as they only see a person in need.  Something happens to us as we get older and we become more cynical.  We see someone we think is trying to deceive us, or perhaps is deserving of their situation.  We become judgemental, besides it is someone else’s problem and that is why we pay tax.

I was fortunate enough to be in Venice for a few days last year for a wedding anniversary.  It was August, humid and very hot.  Whilst going back and fourth from the hotel, I would often pass a beggar on one of the many busy canalside bridges. She would spend the whole day kneeling, with a shawl covering her bowed head and face. Clenched between gnarled looking fingers, was a paper cup which she waved in the direction of passers by, in the hope that some of the rich tourists would take pity and drop a few coins in.

On seeing this, one of my party said she was probably Romanian and lived a prosperous life outside of the tourist areas of Venice.  Returning from our evening meal, and close to the bridge where the beggar would sit, I was passed by an attractive young woman with middle eastern complexion.  Her head was held high and she clasped an expensive looking fashionable handbag with shoes to match. When I looked a little closer I recognized the shawl and uniquely patterned dress.  Unbelievably, it was the same woman, a beggar to whom I had given money earlier that day!  I felt betrayed and foolish.  I had acted like so many tourists and given money to a woman I thought was destitute, but was literally well heeled.

On returning to Spain, and recalling this incident whilst listening to the Dalai Lama, I had a kind of paradigm shift. The Dalai Lama was right.  I was receiving something also when I gave to this woman. It was not money, but it had value…