Thank you for your visit.   If you are interested in the web development work, you may want to visit www.sortedspain.com or visit my facebook page.

I hope to post  samples of my music, information and views on living, working and playing in Spain, as well as a few practical guitar playing tips.  Check out the gig guide on the ‘Playing live @’ tab for appearances.

Karate has become a big part of my life since grading to black belt,  but I still love to play Spanish and Jazz Guitar whenever I can.  Most of my professional career in music was as a commercial guitarist.  It all started with that first guitar bought from Woolworths…

My great grandmother was a piano teacher and my father (at time of writing) still is a double bass player.  After a brief flirtation with bass, I moved over to Spanish guitar, which I still play today.

I started playing professionally back in 1975 aged 17.  The first gigs were playing pop music for the US NCO and Officers’ Clubs in the American Airbases, Italy.  Later I worked in the American Embassy Club in Bonn, which was the capital of West Germany at the time. 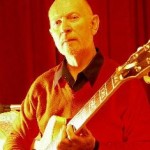 Other jazz influences were Joe Pass, Barney Kessel, Herb Ellis, Charlie Christian, Jim Hall and the fantastic George Benson, as well as my mentor and friend, British guitarist Mike Britton pictured on the right.  You can hear Mike on the Jazz place site, his CD is highly recommended and available through his site.

My first guitar was a steel strung high action instrument.  It was painful to play and even harder to listen to.   I learned the James Bond theme, and then got really going after hearing Andres Segovia playing his Bach Lute suite arrangements.

I currently play a 1949 Gibson es175 archtop guitar, which I have had for about 25 years.  It has a single P90 dog-ear pick-up and was the first model to feature a cutaway.  It is an antique, but I like to gig with it rather than leave it hanging on the wall.

My other guitar is a nylon strung Spanish guitar from the local Luthier Joan Cashimera.  It has been hand crafted with Brazilian hardwood, but has a German Spruce table.  My previous guitar was a casualty of being left out in the rain.  Despite repeated requests for Joan to repair it, he recommended replacing it with one I would take better care of.

Boil in the bag music

I am not a fan of backing tracks (except for practice) . When playing solo, I use just an acoustic guitar and a small amplifier.  I will be posting some more clips on Youtube.com shortly.  Please visit my Youtube channel for the latest.

If you play guitar or just enjoy the music, I hope you will find something of interest on this site.